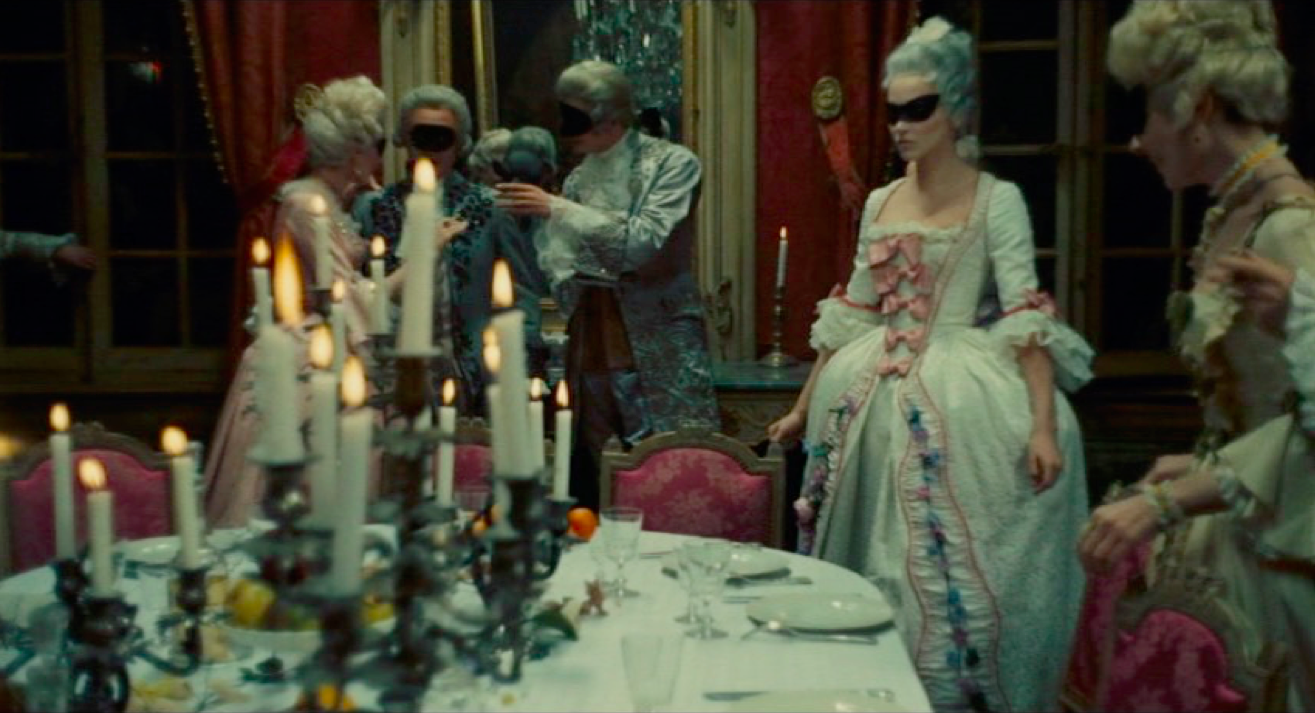 To examine Jacques Rivette’s oeuvre in terms of enclosure, writing about La Religieuse (1966) is most and least appropriate. A filmmaker of exhilarating invisible architectures, Rivette compulsively refracts structures of inside and outside, control and freedom, enclosure and escape. An axiom of enclosure in Rivette’s cinema might begin with the ghostly mansion in Céline and Julie Go Boating (1974), the durational marking Marianne into frame in La belle noiseuse (1991), by pointing out the title Out 1: Noli me tangere (1971) was chosen precisely in opposition to the word “in,” or to the subtitle of Duelle (1976), “Une quarantaine.”

La Religieuse, in view of Rivette’s experimentations with improvisation, duration, and boundaries of cinematic tropes, is more obviously conventional in narrative form and literal in its depiction of enclosure as subject, a youngest daughter forced into convent life against her will, her entrapment relentlessly visualized by gridlike bars, screens and gates. Watching La Religieuse for the first time from my own form of enclosure, on my laptop in New York pandemic July, this most confined film propelled me sweetly into Rivette’s infrastructure, conspiring unexpectedly with preoccupations— doubling, disguise, and invisible architectures— of his subsequent films. 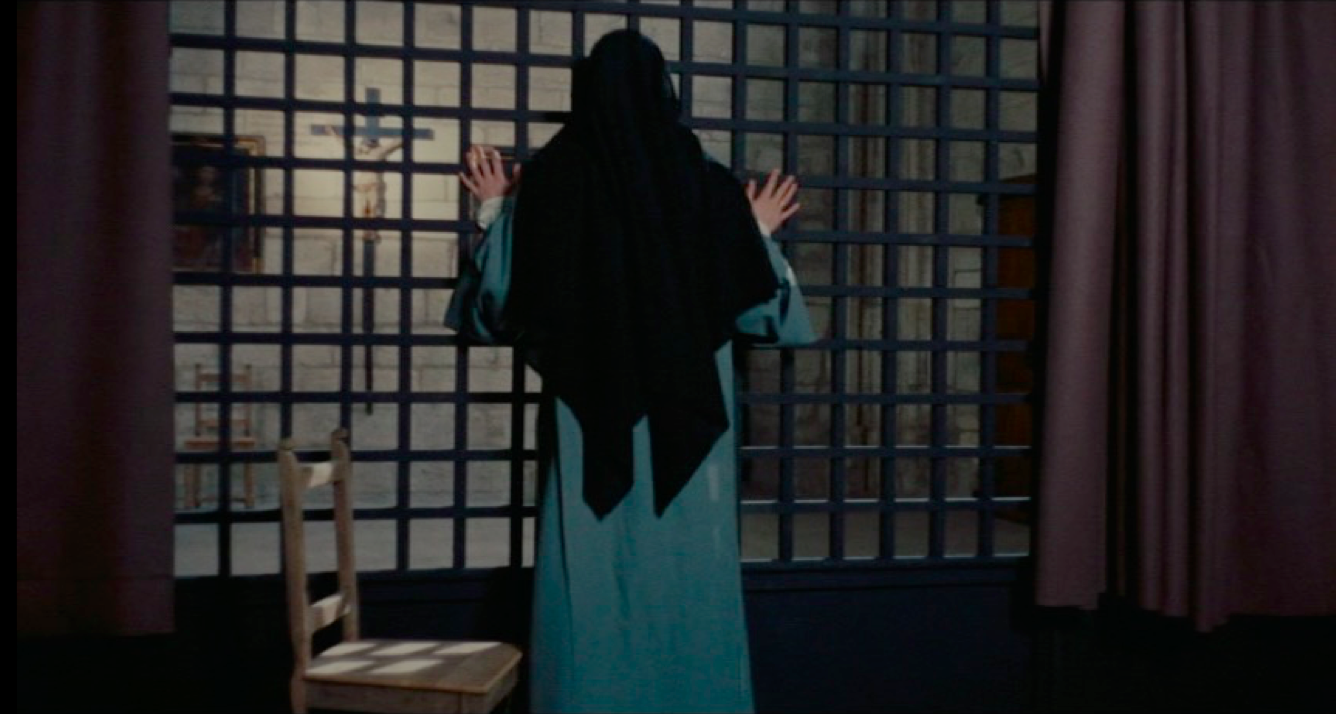 The tri-part architecture of La Religieuse itself suggests an enclosure: the middle and majority of the film takes place within the walls of convents, bracketed by short sections outside these walls. The film starts in the domestic sphere where Suzanne Simonin (Anna Karina) protests futilely against a religious life to which she has no calling. The final scenes trace her escape from the enclosure, disguised and vagrant. The narrative bracketing compels a consideration of the convent as a “house of fiction,” the literary concept Jonathan Rosenbaum, via James, usefully applies to Rivette’s interrogations of fictions through “totally closed worlds.” In La Religieuse, the enclosed environment of the convent doubles as a theater; Catholicism, observed Rivette, the “peak of theatricality.” Within the convent/theater, Sister Suzanne is invariably an actor, a fraud, an apparition, her mechanical/melodramatic comportment not dissimilar to those inhabiting the haunted mansion in Céline and Julie.

Adapting Diderot’s epistolary novel, Rivette’s 18th century concern, rather than selfhood or religion, is the architecture of the law. The sympathetic Mother Superior Mme Moni, accepting Suzanne into the convent despite her lack of calling, permits “Our role here below is maybe to take on rebellious spirits and teach them to accept the laws imposed upon us.” Suzanne’s ensuing legal battle to have her vows rescinded is rejected by the church; the most charitable option finally available is to “change houses.” Rivette’s fascination with settings, rules, and systems finds its most conspicuous and literal expression in La Religieuse. The convent, as an enclosure within the structure of the film, operates on one level in a suggested lawlessness, independently from oversight of the Church. Suzanne’s first convent is a house of irrational, dehumanizing abuse, the second convent a sapphic saturnalia. As microcosms, however, both convents contain their own internal logic of law through rules of authority, favoritism and control. 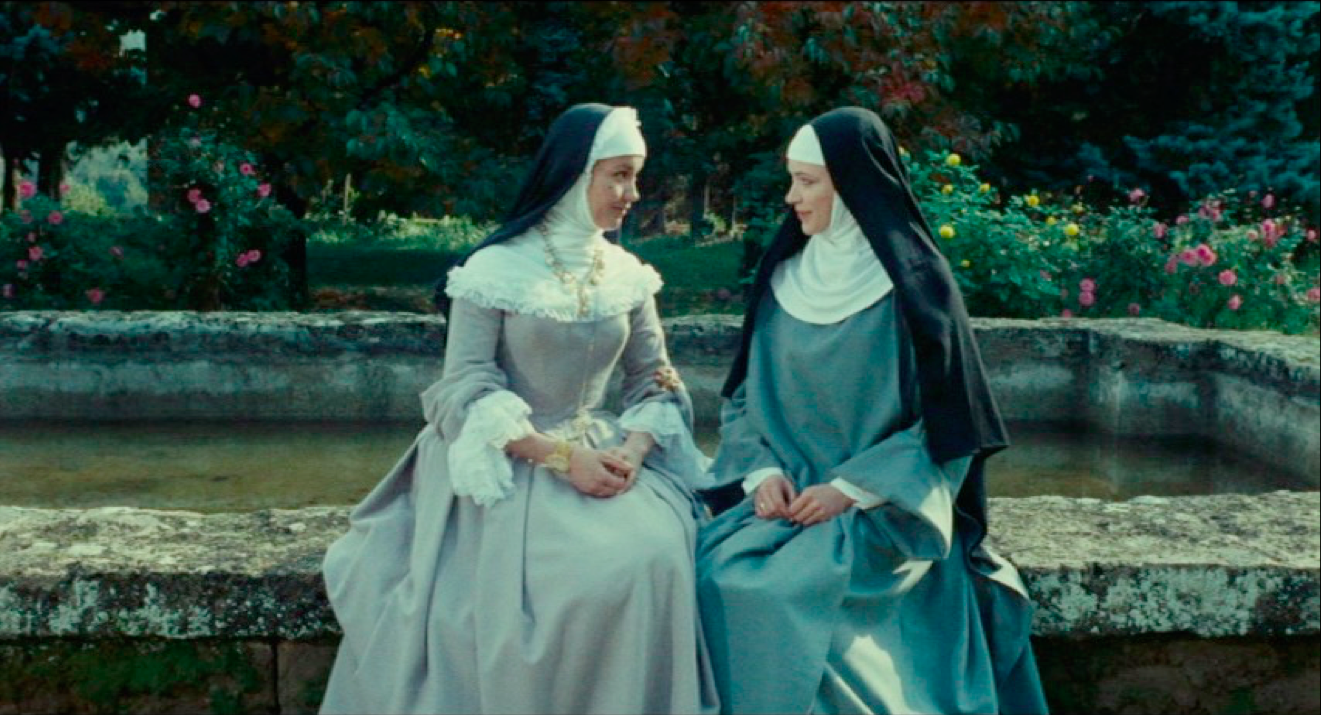 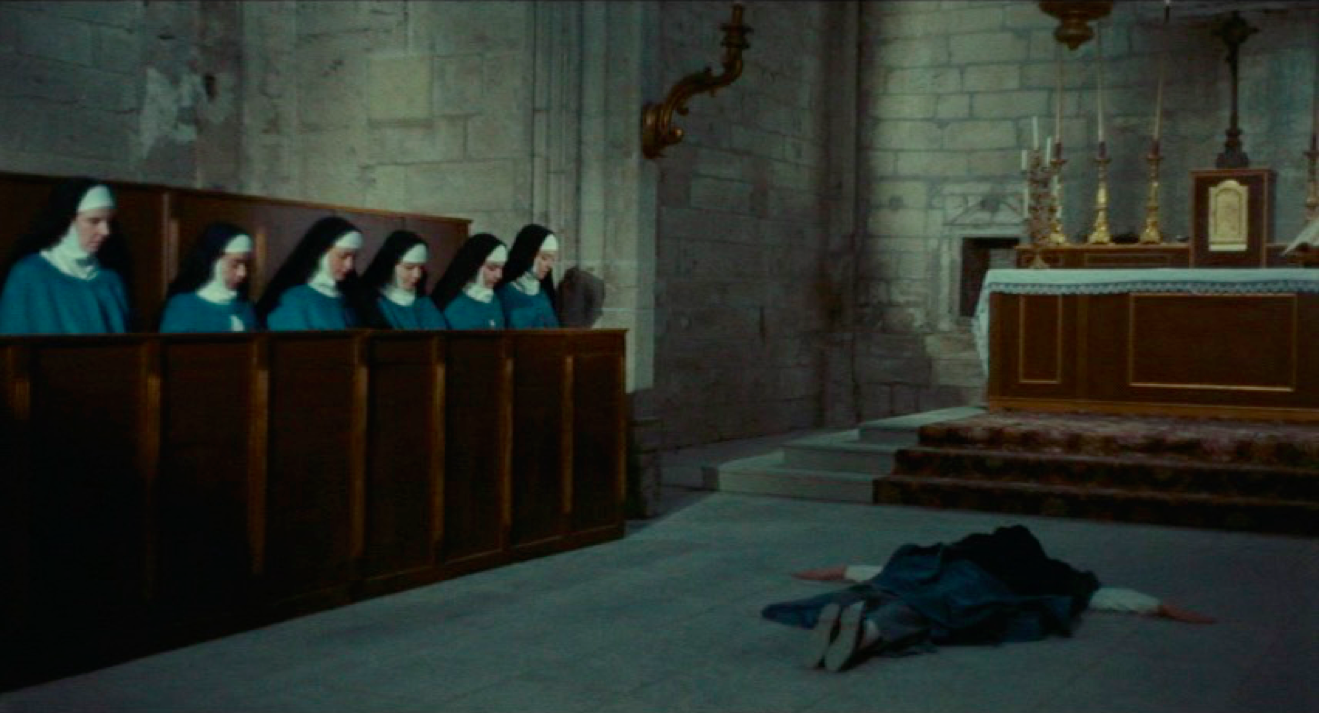 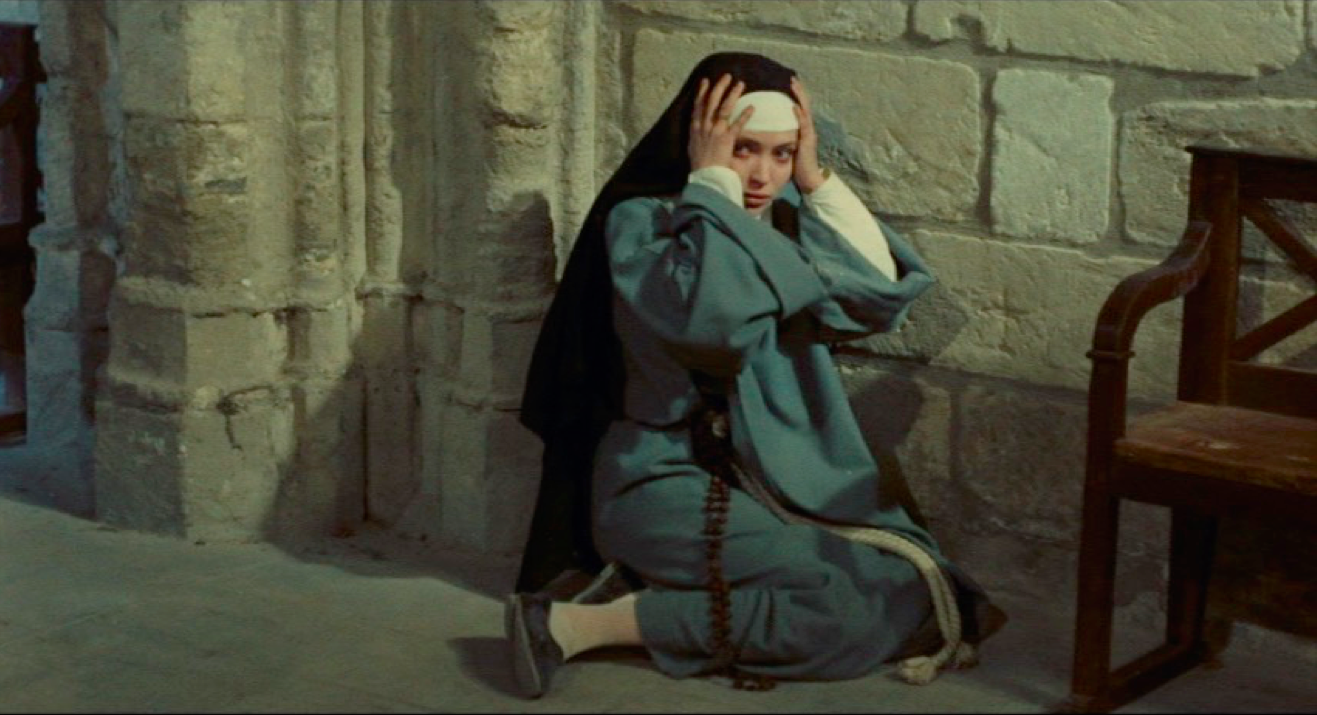 For Rivette, the interior does not signal interiority. He appositely notes, in reference to Fritz Lang, that Lang’s characters “have lost all individual value,” thus function as “no more than human concepts.” Suzanne’s unyielding protestation throughout the film is not an impulse towards individualism or agency, but (per Molly Haskell) “disinterested desire.” Her refusal— “I don’t want to be shut up here or anywhere!”— is the desire for absolute, transcendental, and abstract freedom. The film’s finale of vagrancy functions as Rivettian doubling. Escaped from the convent, Suzanne (now “Marie”) remains an actor, a fraud, and in disguise: in the final scene, adorned like a bibelot and donning a Feuilladian mask, she finds herself still tethered by pernicious Law. This is peak Rivette, the trick of boundaries. In La Religieuse, the “house of fiction” lacks “windows”— the window in the last scene acts as a mirror. Finding transcendence in the literal or closed is only one tenet of Rivette’s play in the cinematic hall of mirrors.

Nary is there play (in the playful sense) in La Religieuse. A Boussuet quote near the beginning of the film proffers a warning: “Do not enter rashly into such a high calling. And if you don’t feel extreme disgust with the world, sister, leave that enclosure.” In Suzanne’s essential urge to freedom there is a premise of Rivettian ethos.

No, I was wrong— the Boussuet quote is not a warning, but an optimism. 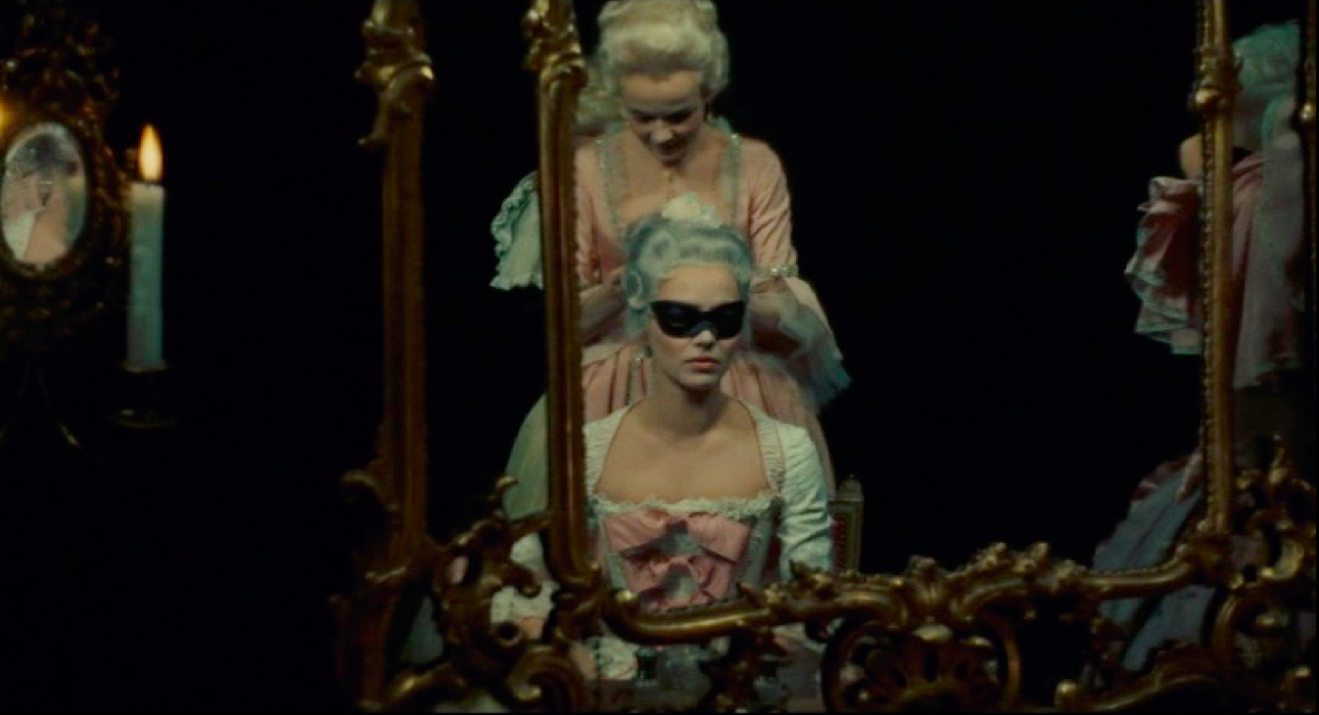