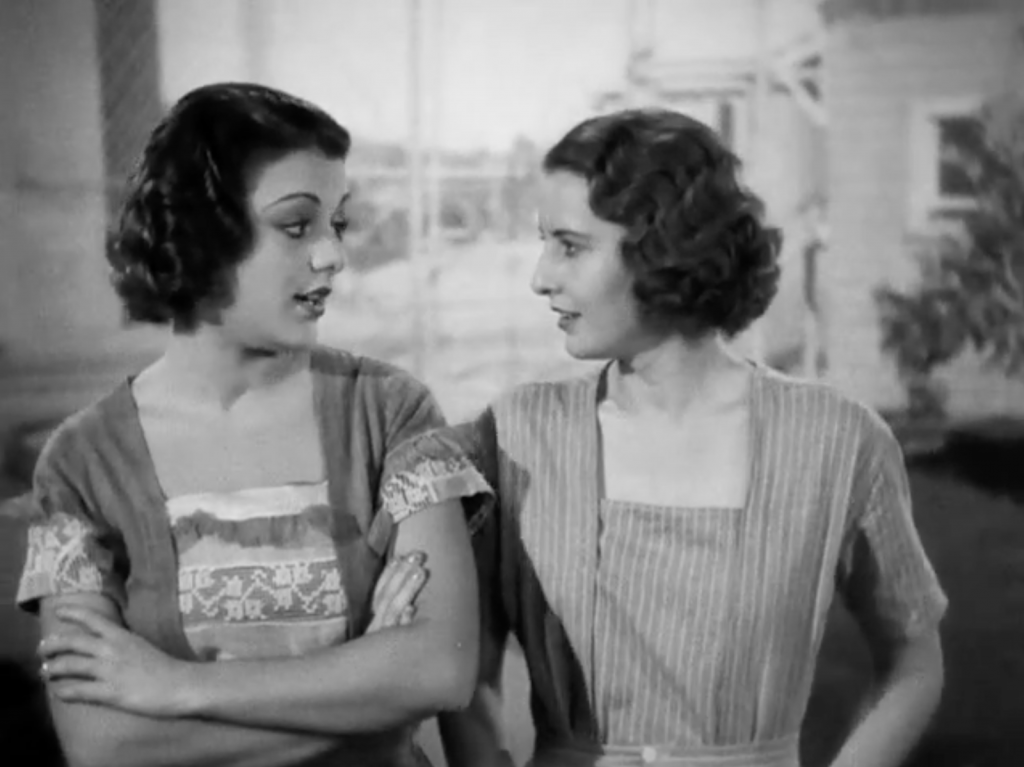 Notes on Ladies They Talk About and Beguines

So quip Barbara Stanwyck and Lillian Roth while on tour of Stanwyck’s new residence, San Quentin State prison, in Ladies They Talk About (1933.) The film is hallmark pre-Code: pre-Code referring to talking pictures made in Hollywood between 1930 when the Hays censorship code was created, and 1934 when the code was enforced. Pre-Code films are terrifically odd and experimental: both in form as early sound films made before Hollywood narrative formula congealed, and in content with their unbridled eschewing of the censorship code, producing wildly salacious, vice-ridden and unusually feminist films.

The transgressions of censorship in Ladies They Talk About are echoed by transgressions of female subordination within the narrative. Most of the filmtakes place within the enclosure of the women’s penitentiary. In this prison there is an exhilarating absence of realisms of control and punishment. Wisecracking and negligeed inmates lounge more than they labor, are pictured reading, crooning, smoking, congregating, playing cards, forming alliances, and doing each other’s hair. The effect, in the language of Saidiya Hartman, is of “dancing” and “collaboration” within the enclosure.

The Ladies They Talk About are tough girls, not wronged innocents, remorseful or reformed. Stanwyck’s swaggering Nan Taylor never repents her infractions; not her participation in a bank robbery, her role in a fatal jailbreak, nor shooting an infatuated preacher before realizing she’s also in love with him (being a pre-Code film, she gets the man.)  Not surprisingly, the female inmates’ crimes tend to have patricidal angles. Women “being bad” or going against the law is itself a patricidal impulse. As the sublime Lillian Roth describes a fellow inmate: “This little creampuff met a guy at a dinner one night and wanted to know what his name was, so she shot him and read it in the morning papers.” The enclosed walls of the prison denote a space that is socially equalizing and a locus for living independently of patriarchal authority and oversight. The prison matrons are sisterly confidants, a Black inmate laughs at a WASPy aristocratic inmate who dares order her around, and of course there are lesbian innuendos: “Watch out for her, she likes to wrestle.”

Collaborative communities of women historically occupy scant screen time, but can be said to flourish in ‘30s pre-Code and ‘70s exploitation films, canonical periods of lax censorship oversight. (Lenient censure was practiced to assist with economic crises in the film industry at those moments). We can ascertain of this categorically censored status that there is somethinginherently dangerous in the representation of independently functioning communities of women, or that at least such communities of ladies are regarded with formidable suspicion.

A suspicious regard toward female independent collectives has historical precedent; one example, as discussed in the Enclosure research group, is medieval beguine communities. Beginning in the 13th century some women rejected the two traditional avenues of either marriage or convent life, inventing a third pathway as beguines. In effect, this spawned a social movement permitting single women to create and congregate in large, same-sex, pious, intentional communities. The beguines appointed, or named themselves, formulating their own religious lives and rules. Women chose to enter or leave the beguinage. Taking no vows, these groups lacked authorization of the church and were never recognized by the papacy.  Without papal oversight, the unofficial, devout, female-led collectives roused derision, and were considered subversive and suspect.

Thinking about the prototypical pre-Code women in Ladies They Talk About and the beguines might generate interesting parallels in their refusals of patriarchal law and engagement in experiments of independent female living. Returning to Hartman: “Improvisation- the aesthetic possibilities that resided in the unforeseen, collaboration in the space of enclosure, the secondary rhythms of social life capable of creating an opening where there was none- exceeded the interpretive grid of the state authorities…”

This is the second in a series of posts linking cinema to medieval claustration culture, by Carolyn Funk. In addition to being a member of the Enclosure Research Group, Funk is an artist and film projectionist based in NYC.